New doctors at the University of Debrecen

After a long time, the University of Debrecen was finally able to hold a doctoral inauguration. The leadership of the university conferred Ph D and diplomas in the morning of the 5 June event and habilitation diplomas, as well as Professor Emeritus titles and awards in the afternoon.

At the Saturday morning celebration members of the Doctoral Council of the University of Debrecen marched into the Cour d’honneur of the Main Building of UD, the venue of the inauguration and doctoral conferment ceremony, to the usual sounds of fanfare. Due to the pandemic situation the programme was private and publicity was provided by the university online. 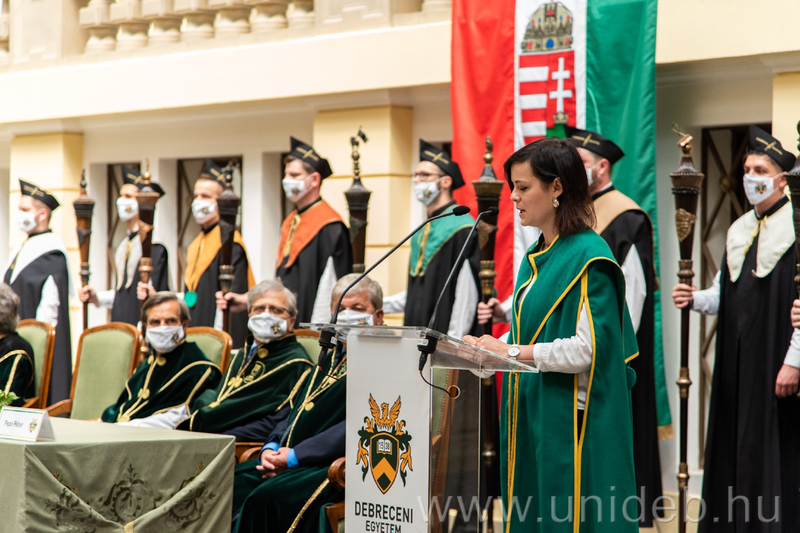 "It has been a long time since we were last able to gather at such a ceremony, and the fact that we cannot organize the doctoral conferment ceremony in the traditional way now shows that the trials of the recent past have affected us to this day," said László Csernoch, vice rector for academic affairs for UD. In his speech the President, the University Doctoral and Habilitation Council highlighted that the academic community may never have had as great a responsibility in shaping public opinion as it has in the past year and a half, and is likely to continue to have in the period ahead.

- It is important for society to have confidence in its scientists and to take what they say seriously. This trust must be earned. This cannot be achieved in any other way but by exemplary behavior and by communicating scientific information in an authentic way, with the most accurate acts possible, but always comprehensible - emphasized László Csernoch. 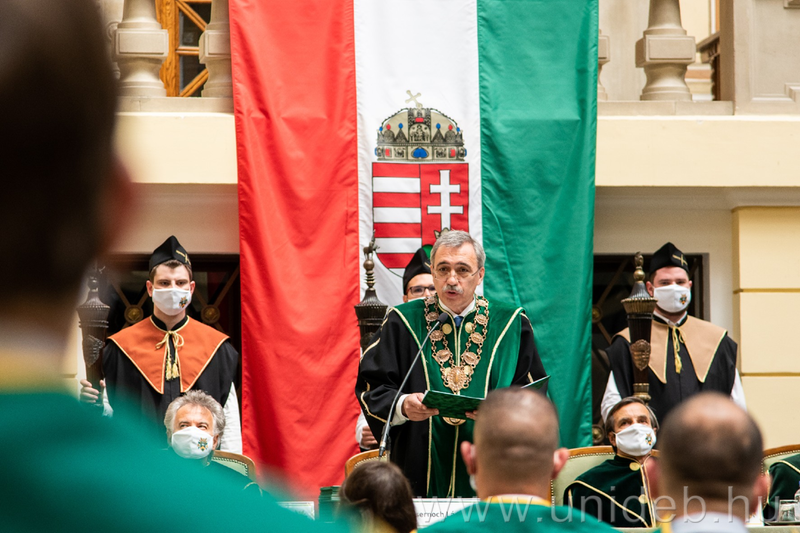 “I swear that I will behave in ways befitting doctors of the University of Debrecen. I will work to enhance the reputation of the university to the best of my abilities. By respecting the principles of academic ethics, I will serve scientific progress, universal human culture and the preservation of national values,”the oath said. 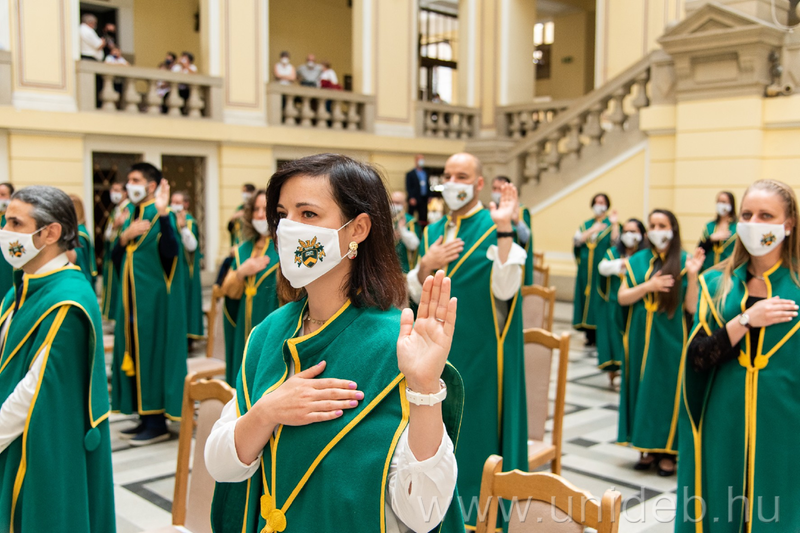 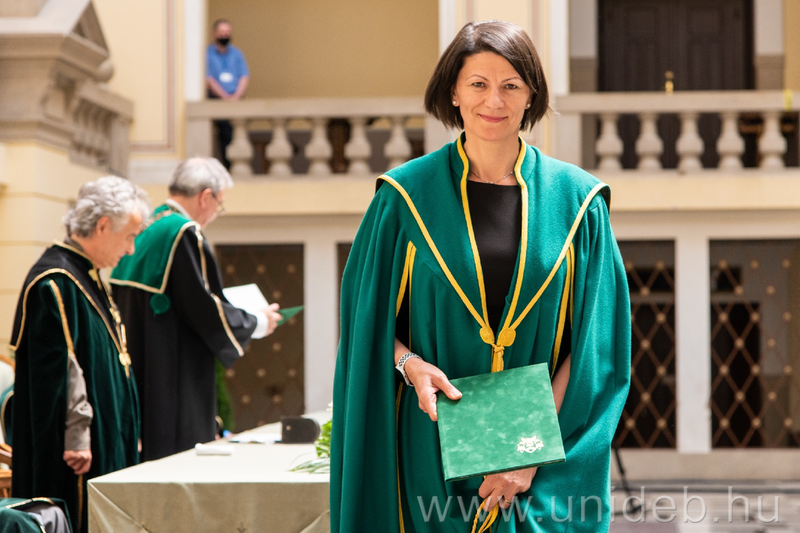 The program continued in the afternoon with a graduation ceremony in the Cour d’honneur of the Main Building.

Vice rector László Csernoch, referring to events that took place 100 years ago, quoted Rector József Pokoly from his speech at the inauguration ceremony of the institution on June 5, 1921: “The name of István Tisza University is therefore a goal and a guiding principle for us; the burden we have borne for the glory of the nation's life and the power to carry it; a spur that encourages us to run incessantly.” He then added, “We don’t know what the features of the nation will be in the distant future. But there can be no doubt that natural as well as human relations only allow for a community within certain drawn boundaries which can contribute to the development of an individual’s character.” 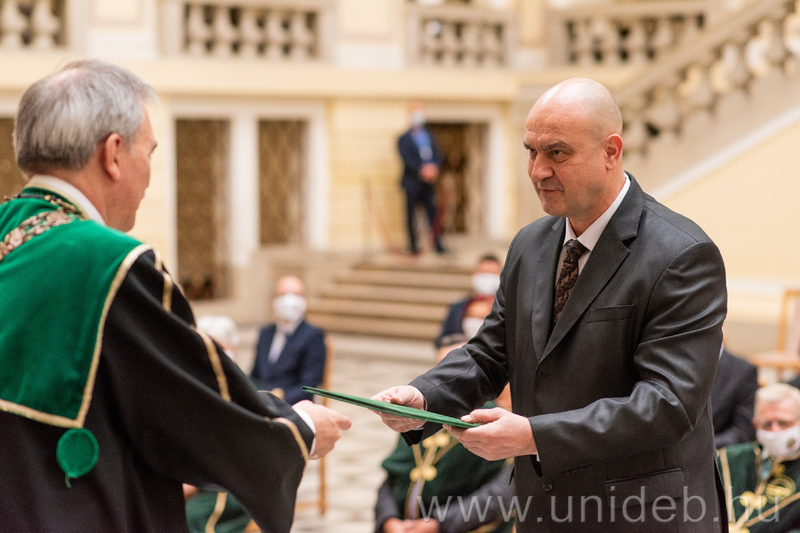 The Senate of the University of Debrecen awarded the title of Professor Emeritus to seven retired teachers, recognizing the achievements of the most outstanding professors of the institution, their work in promoting the interests of the university, and at the same time providing rights and conditions for their further activities. 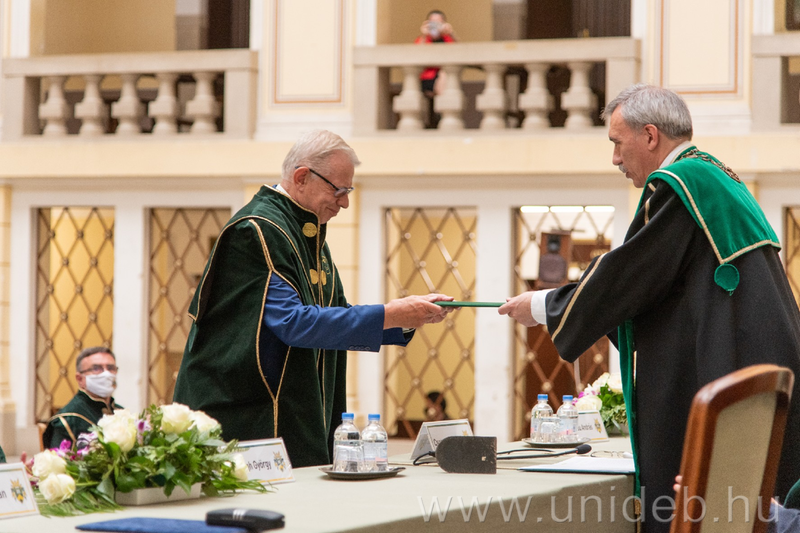 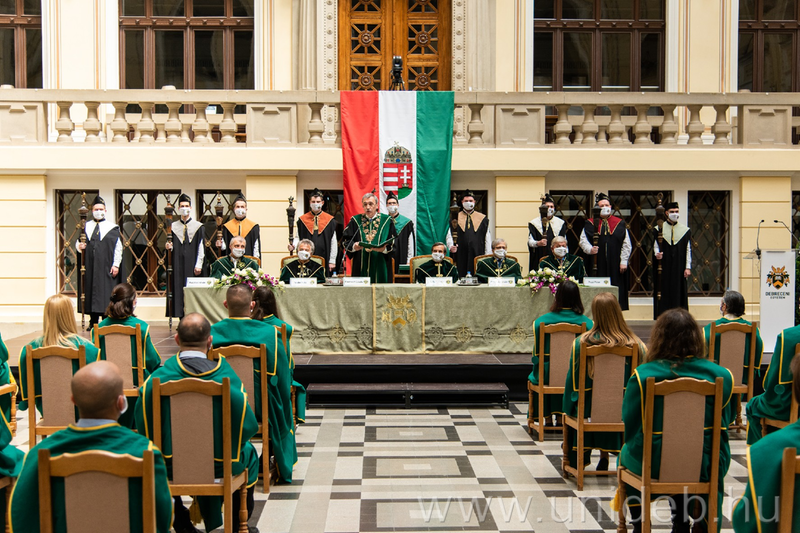 The award was presented to five researchers at the festive event:

In the field of molecular science, Gyula Tircsó, associate professor for his work published in the Journal of the American Chemical Society.

In the field of physics, computing and materials science, Zoltán Péli was awarded the title of postdoctoral researcher for his work published in the journal Physical Review D.

In the field of molecular medicine, Éva Katalin Sikura, research assistant for her work published in the British Journal of Pharmacology received the same title.

In the field of health and environmental sciences, Professor Tibor Magura for his work published in the journal Global Ecology and Biogeography.

György Kalmár, associate professor in the field of humanities for his volume published by Palgrave Macmillan.