University developments in the Science Park

The Innovation Centre and the Vaccine Pilot Plant will be the first university facilities in the Science Park of the University of Debrecen. The cornerstones of the buildings were laid on Tuesday in the presence of László Palkovics, minister of innovation and technology.

The development of the Science Park of the University of Debrecen has reached a significant milestone: after the investments of international companies already established there, the 70-hectare park will also be home for two facilities of the university itself. The cornerstone of the Vaccine Pilot Plant was laid first by Zoltán Szilvássy rector, and Zoltán Bács chancellor, with the participation of László Palkovics , minister of innovation and technology, Lajos Kósa, member of Parliament, László Papp, mayor, Lajos Barcsa, vice mayor, Éva Skultéti, cluster manager. 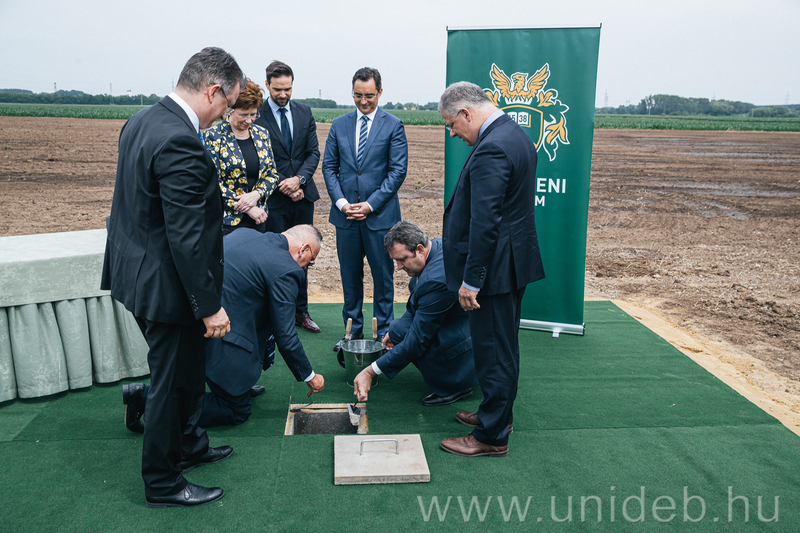 Five years ago, as one of Hungary’s leading institutes of higher education, the University of Debrecen identified the health industry, as its area of focus, along with agriculture, the food processing industry and sports. The university has been working with its partners for years on preparing the manufacturing of vaccines and developing their active ingredients. The building will have a floor space of 2,169 square metres including research facilities (technological space) and offices serving them. Due to its size and double function, the plant, which will also be suitable for the production of vaccines in small series, will be unique in Europe. Its creation will further strengthen the cooperation between industry and higher education, since research, development and innovation, as well as partly also education, can be realized in the same place, resulting in competitive, marketable products and services.

Work in the new building can start after the completion of the construction, in the first quarter of 2023. The institution plans to realize the products from grant resources, from a total estimated budget of HUF 4 billion.

The Innovation Centre of the University of Debrecen is designed to facilitate the research, development and innovation activities, to support businesses building upon the knowledge generated at the university, as well as to realize the economic development plans of the region.

After laying the cornerstone of the building, Zoltán Szilvássy said that the innovation plaza to be realized is a vertically organized, university-centred innovation system, which is unique in Hungary. 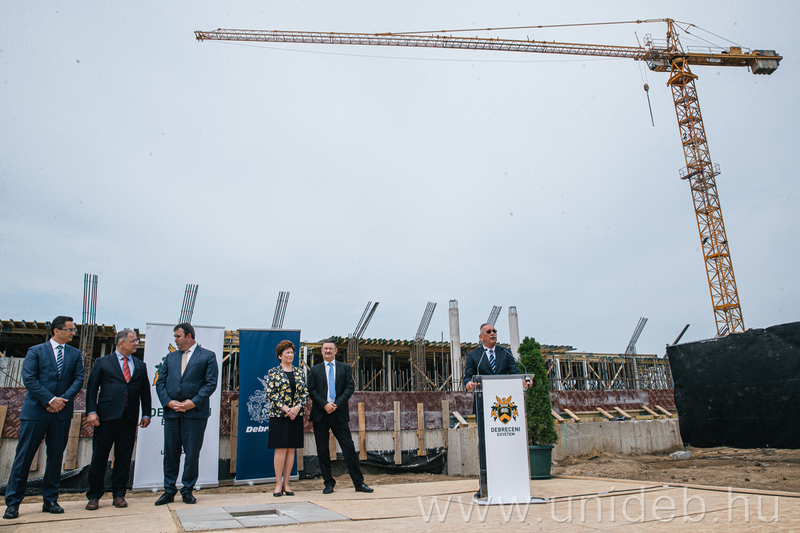 “We designed this new facility for the health industry innovation activities of the university, but in the meantime, the research and development profile of our institution also evolved, and therefore, it will also house development units and research laboratories of the automotive industry,” Zoltán Szilvássy added.

László Palkovics, minister of innovation and technology, emphasized that the efficient development of the economic and innovation environments is only possible jointly, proof of which is what has been happening in Debrecen in the past few years and will continue to happen in the years to come.

“In the past few months of the coronavirus situation, the University of Debrecen was one of the Hungarian institutes of higher education that were able to respond quickly, and knew how to handle the situation – partly in patient care and partly in research. Such projects were started through which we can prepare for the virus staying with us, which means that medicines, vaccines and new therapies need to be developed. These would be inconceivable without such facilities as the vaccine plant and the innovation centre,” László Palkovics  stated. 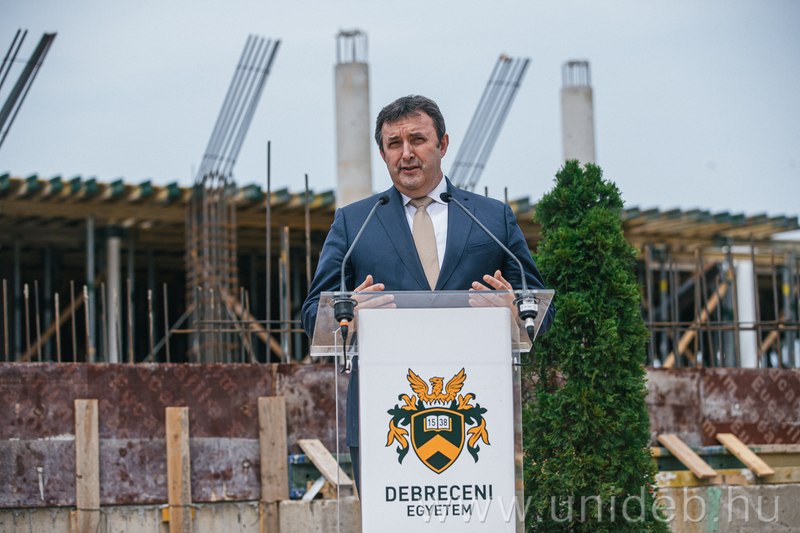 Lajos Kósa, member of Parliament, said that the question would no longer occur to anyone today whether the University of Debrecen and the local economy needs such institutions. In 2014 and 2015, there were still such voices, he added.

In his speech, László Papp mayor of Debrecen, emphasized that there is a long history of excellent cooperation between the city and the university, with the Innovation Centre being an important proof of that fact.

“We are strongly committed to cooperation with the University of Debrecen, to joint developments and programmes. I am convinced that the city will win the labour market competition in classrooms, and the cities of the future will be those that operate major education centres,” László Papp said.

Éva Skultéti, in her capacity as cluster manager of Pharmapolis Debrecen Innovative Pharmaceutical Cluster, emphasized that the work of twelve years is now coming to fruition, and the University of Debrecen has become a major economic powerhouse in the past decade, showing such a great example for the cooperation between higher education and industry, which is still rare to find.

Zoltán Bács, chancellor of the University of Debrecen, recalled that the first feasibility study of the “innovation plaza” was prepared 12 years ago, and even though it looked too much ahead of its time, the future-oriented facility is finally materializing in tangible form. 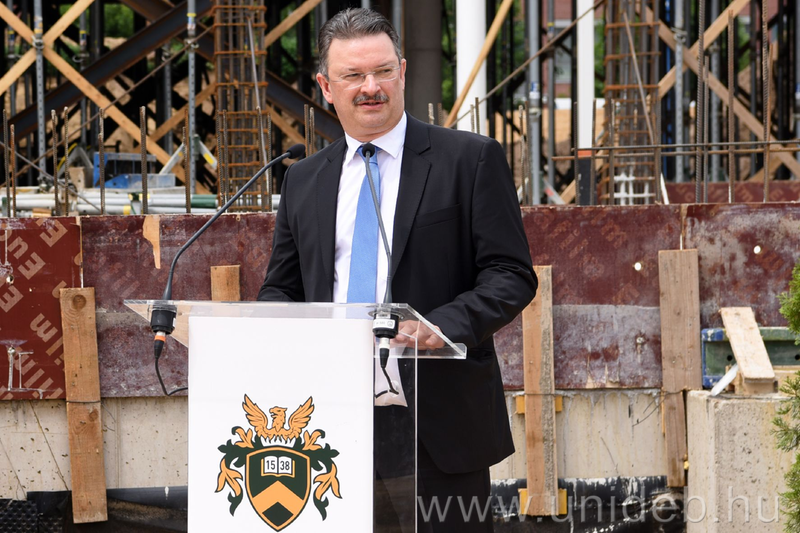 “I hope that the Innovation Centre will be an important location for developments and cooperation, and this latter is to be understood not only as cooperation between the city, the university and the ministry, but also cooperation with companies,” Zoltán Bács said.

The three-floor building, having a total gross floor space of 5,532 square metres (of which 5,297 square metres are the net, useful area), will be an important meeting point for start-ups, research companies and university life, bringing together stakeholders of education, research and the private sector under the same roof. The centre will also play a role in providing services for companies establishing themselves in the park.

A laboratory and workshops will be built on the lower level of the building. Over this reinforced concrete floor, using lightweight structure architectural solutions, a community innovation “marketplace” will be built, with community workplaces, meeting rooms, as well as dining and resting facilities. The top floor will be occupied by offices.

A parking lot accommodating 197 cars and two buses, also including 5 handicapped parking spaces, will be created adjacent to the centre. There will be also charging stations serving up to ten electric vehicles. According to the plans, the size of the surrounding green area will be nearly 8,700 square metres. The Innovation Centre will be realized from HUF 3,883 million of Hungarian state funding. The site preparation was completed by Dryvit Profit Kft. The construction of the facility is currently under way by Hunép Kft., on the basis of the design of BORD Építész Stúdió Kft., with February 2021 as the completion date set.

University Developments in the Debrecen 2030 programme

During his visit on Tuesday, László Palkovics also presented the Debrecen 2030 programme comprising the development projects of the city in the next ten years. As the minister of innovation and technology said, the government will primarily support economic, educational, transportation, cultural, commercial and healthcare development projects in the city, in which the University of Debrecen will play an outstanding role. The amount of HUF 48,3 billion has already been allocated to the programme elements of the first three years, with the municipality, the University of Debrecen, and Nemzeti Infrastruktúra-fejlesztő Zrt. (the national infrastructure development company) as the beneficiaries. 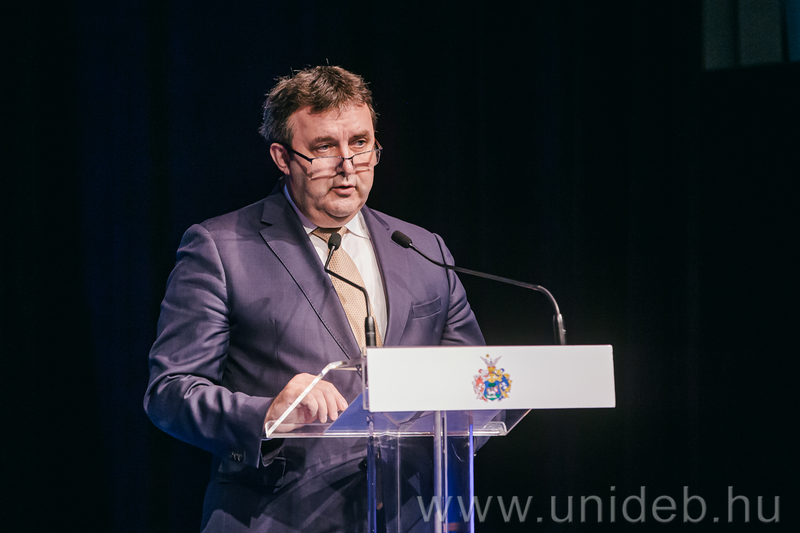 “It is not my habit to praise university leaders, but I must note that the University of Debrecen and its clinics have done an excellent job in the pandemic situation, the treatment of patients and in the related research projects. This is something that we can built on in the future,” the minister declared.

Zoltán Szilvássy, the rector of the University of Debrecen, explained that in our globalized world, a region can only be successful if it can offer excellent education, the benefits of which must be put to use by companies in Hungarian ownership, in an innovative way. He emphasized that the University of Debrecen is participating in innovative clusters in which the central government, local authorities, industry players and financial institutions are also represented. He recalled that the international educational relationships of the University of Debrecen also developed significantly in recent times; as examples, he mentioned the cooperation agreements concluded with the Massachusetts Institute of Technology and Lomonosov Moscow State University. 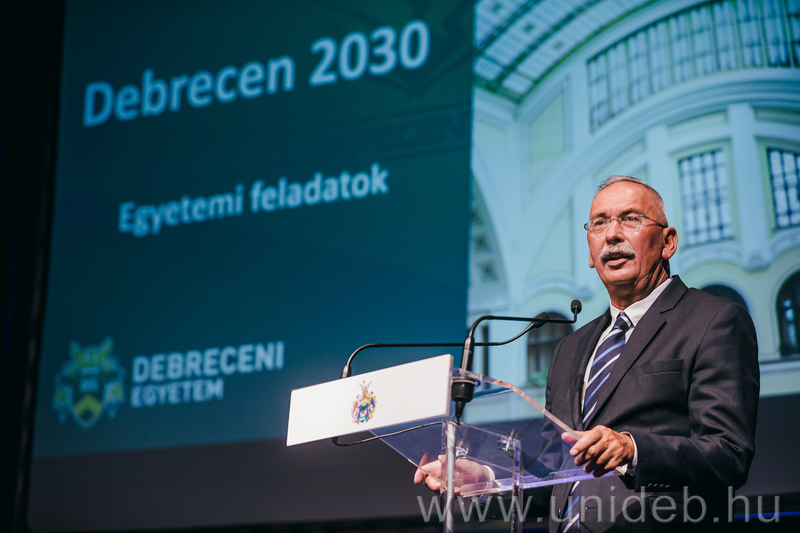 The rector also announced that, in the framework of the Debrecen 2030 programme, the former solar physics observatory located in the Botanical Garden of the university will be converted into a state-of-the-art detector station able to receive and process signals from all satellites. Such data can be very well used, for example, in monitoring climate change, in water management, as well as helping in plant production and animal husbandry.

“Together with the American company General Electric and with Rosatom of Russia, we will jointly establish an environmental ontology research institute, which could, in a fortunate scenario, also be further developed into an environmental ontology foundation university,” Zoltán Szilvássy added.
In his presentation, Zoltán Bács, chancellor, emphasized that the central government would support the realization of the university’s vehicle industry education centre with HUF 19 billion. In addition, the state will also provide an additional HUF 15 billion until 2023 for the renovation of the clinics and the public utility infrastructure serving the Egyetem Square campus. The main building of Balásházy János Secondary School will also be renovated, as will be the exterior of the main building of the university, where an energy upgrading project will also be implemented. In Nagyerdei Stadium, an e-sport centre will be created, while in the Science Park, the water, gas, electric and road network will be extended further. 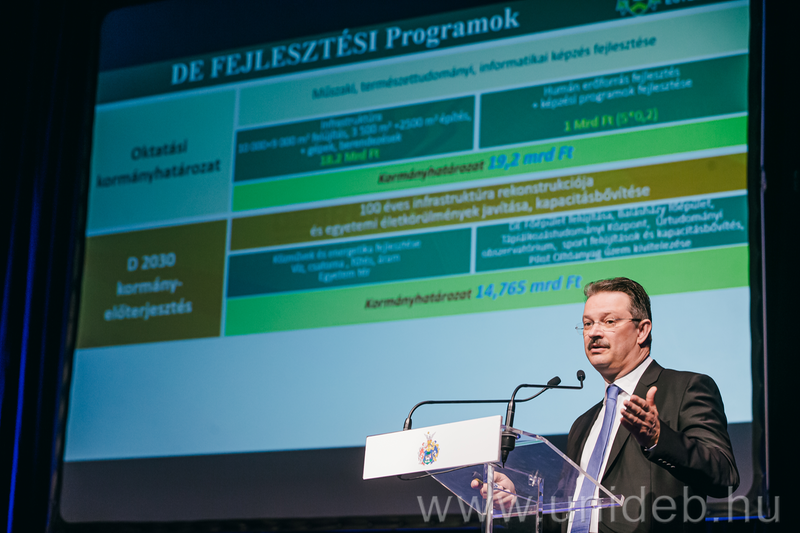 On the Böszörményi Street campus, the infrastructure of sports and sports science will be developed with new buildings and annexes. An energy upgrading is also planned in the sports hall built on that campus in the late 1990s. Since the DESOK building erected in Dóczy Street a few years ago cannot accommodate further needs, additional classrooms, offices and changing rooms will be built in the Böszörményi Street facility.

At the event held in Kölcsey Convention Centre, László Papp, mayor of the city, provided information on the details of the Debrecen 2030 programme, followed by Lajos Kósa, member of Parliament also praising the forward-looking plans. In his words, thanks to these developments, Debrecen will be a successful city, also contributing thereby to the overall success of Hungary.