Novel Technology Introduced into the Study of Rivers

Researchers of Department of Physical Geography and Geoinformatics at the UD have conducted studies of hydro-morphodynamics, measuring the spatial and temporal river channel changes in the Sajó River, with the help of innovative measuring devices and in collaboration with German researchers.

Researchers of Debreceni Egyetem Természettudományi és Technológiai Karának Természetföldrajzi és Geoinformatikai Tanszéke [Department of Physical Geography and Geoinformatics of the Faculty of Science and Technology at the University of Debrecen] have monitored the changing hydro-morphodynamics of the Sajó River since the flood of 2010. Findings published in 2014 revealed that the sub-reaches of the Sajó displayed an almost unbelievably fast process of altering its riverbed: by advancing several meters sideways every year, it regularly caused a serious degree of economic damage to the arable land areas alongside the riverbank. At certain parts, this advancement reached beyond a hundred meters, compared to the river channel position in 1980. The researchers at UD have also conducted study projects in recent years, during the course of which they explored the extent of meander evolution along the full length of the river Sajó within the borders of Hungary. In the practical implementation of the research project, an impressive chunk of assistance has been received from a special piece of experimental equipment provided by the German Institute of Photogrammetry and Remote Sensing at Technische Universität Dresden. 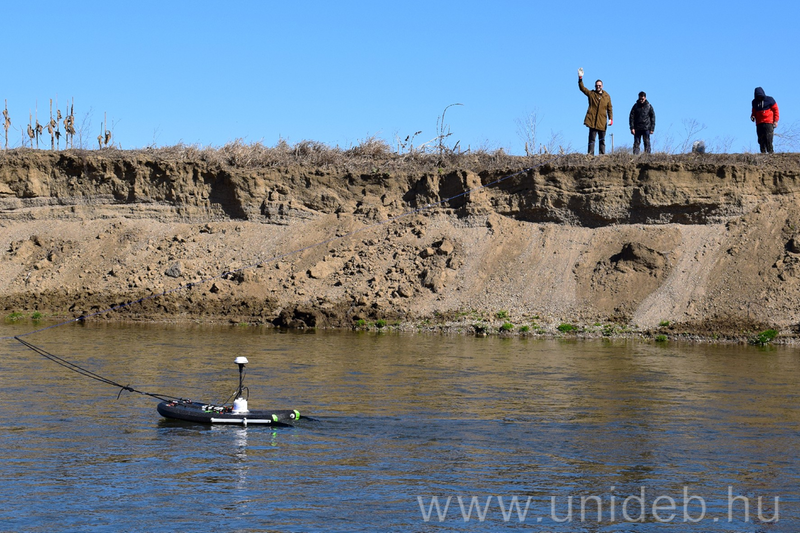 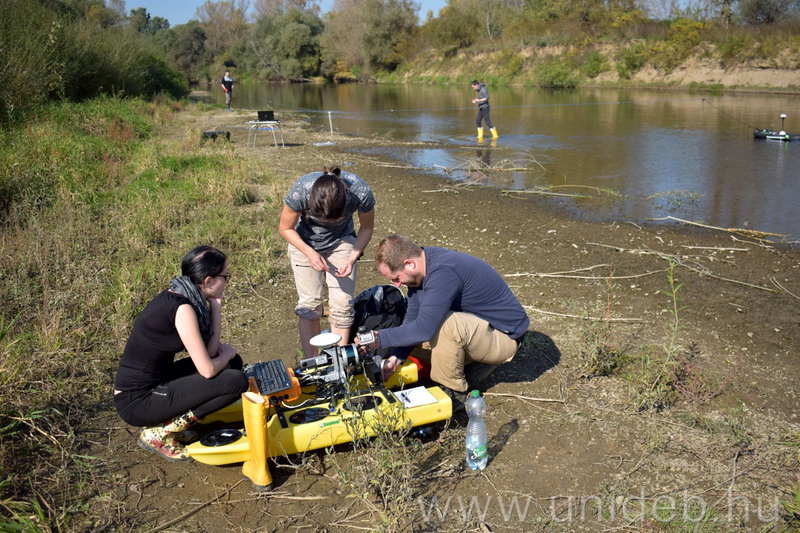 “We use the single-beam echo sounder for analyzing the channel erosive activity of the river. This device prepares a three-dimensional model of the riverbed under water, while the laser scanner is used for scanning the above-water environment, mapping up the geometric features of the riverbanks (e.g.: the degree of the slanting of the riverbank) as well as the vegetation, which prove to be valuable data for future modeling activities,” said the assistant lecturer responsible for heading the research project.

László Bertalan also stressed the importance of the survey as an implement to produce a detailed and all-embracing series of measurements about the River Sajó. This would prove to be invaluable for Észak-magyarországi Vízügyi Igazgatóság [North-Hungarian Water Conservancy Directorate], too, because this authority does not dispose of a device park required for such surveys. 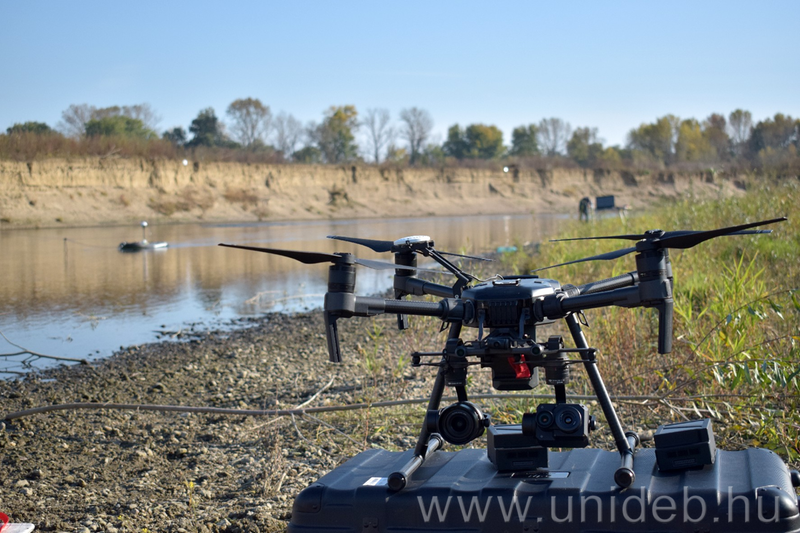 “Another important objective in our project was to utilize and implement the large amount of newly- collected and detailed topographical data in order to prepare the hydrological models of selected individual meandering reaches of the Sajó. With the help of modeling, we may better understand and have a clearer picture of seasonal variations as well as annual channel morphodynamics. The findings will reveal if there are seasonally reoccurring processes involved, which both the water conservancy experts and the local agricultural entrepreneurs can duly prepare for and benefit from,” said the assistant lecturer.

During the course of the field campaign and research, the participants in the project examined to what extent the data collected with the devices of their German colleagues were precise and reliable as well as how and where these technologies and pieces of equipment could be used elsewhere, in other fields. The research findings were then presented at the worldwide conference of the General Assembly 2020 of the internationally acclaimed European Geosciences Union). The conference that usually attracts a crowd of 18 thousand geoscientists annually from all over the world was held online between May 4 and 8 this year, due to the coronavirus pandemic. The presentation of the Debrecen-based research team is currently available online: it is freely accessible to anyone on the website of the conference until the end of May. Conerning the next phase of the research project, László Bertalan explained that, in the future, research participants would be examining and analyzing the factors influencing riverbank erosion on the basis of the measurement data collected so far and they would also prepare a forecast to attempt a prognosis predicting foreseeable spatial and temporal river channel changes and their extent as well as related consequent ecological processes to be expected.

For this objective, and for other research projects conducted currently at the department, the new devices and pieces of equipment acquired during the past weeks will provide substantial assistance. Department Head Szilárd Szabó is certain that the newly obtained research implements and appliances will significantly improve the efficiency of the research efforts. “RTK (real-time kinematic) drones have their own GPS base stations and they gather data from satellites and a stationary base (ground) station, bringing absolute accuracy of each image coordinate down to cm (sub-inch) range. Thus, they use a correction method to save several hours of time and a lot of cost for the experts, who do not need to conduct additional measurements of the area surveyed. Their multi-spectral cameras can record images in real time in as many as 5 spectral bands. At the same time, it can also record the temperature mosaic of the surface with a thermal camera, with the help of which we can conclude to and calculate the quantitative and qualitative distribution of subsurface soil moisture,” said Szilárd Szabó. 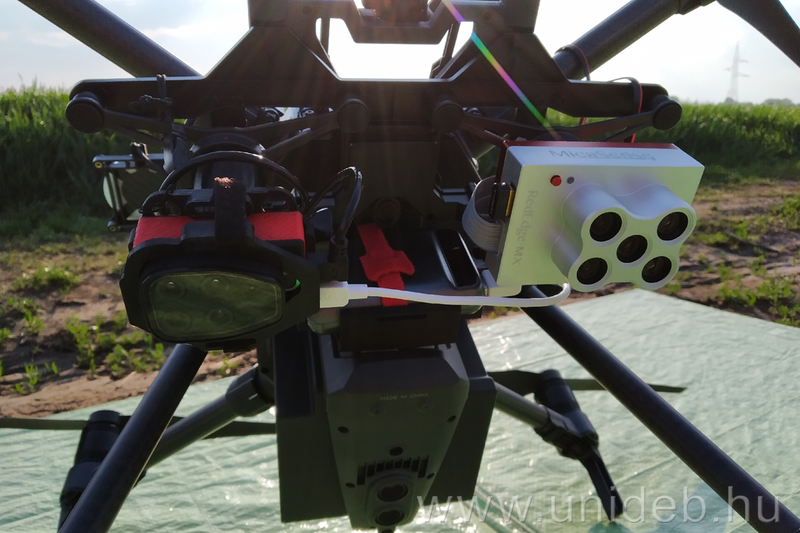 The Head of the Department of Physical Geography and Geoinformatics added that, in addition to the geoscientific measurements, the department faculty members could also put the new devices to good use in a variety of multi-disciplinary research fields. A good example for that would be conducting joint projects with the staff of Távérzékelési Szolgáltató Központ [Remote Sensing Centre] for calibrating yield estimates and water stress analyses in precision agriculture.