The „Vígkarma” Theatre Company of the University of Debrecen gave two performances of the play ÜBÜ FC directed by Gábor Halmi in the Canadian town of Saint John (New Brunswick) during their tour between 26 August and 1 September.

The invitation was preceded by several successful Hungarian and international performances of ÜBÜ FC at diverse students’ and amateur drama festivals.

- The performance had also travelled to the Joy-fest in Kiev, where Aled Rhys-Jones from Wales, a member of the managing board of IATA/AITA, world organisation  of students’ and non-professional actors,  established by UNESCO, saw the performance and liked it.
Following this event, the selection committee of AITA, in full agreement with the Hungarian association, decided that the performance of the Vígkarma company should represent Hungary in Canada, Zsigmond Lakó, director of the company said. 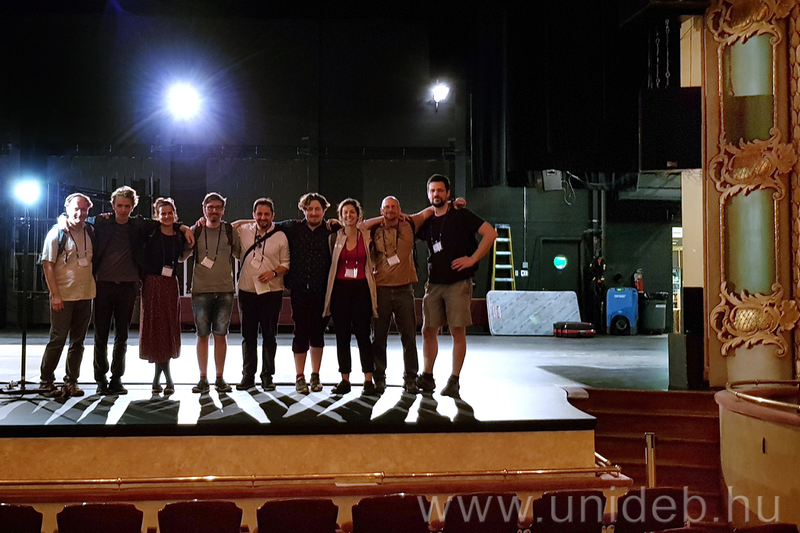 The performances took place at two venues, on the large stage of Imperial Theatre and on that of a smaller studio theatre, which, however, had perfect theatrical infrastructure. The Hungarian group performed the play on both occasions on the large stage to the great enjoyment of the audience , which awarded the acting with a big round of applause.

- The effectiveness of formal drama training in Debrecen is manifested by the fact that three members of the theatre company are former students of the drama specialisation of the Ady Endre highschool of Debrecen, and four have ties to the English-language drama training taking place at the Institute of English and American Studies of the faculty of Art of the University of Debrecen. Talents fostered at the DESz school hace completed the company, Zsigmond Lakó told the portal hirek.unideb.hu.

Naturally, in addition to the performances, the company had some time to relax, too. During the seven days they spent in Canada, they were taken on a bus ride to familiarise themselves with the surroundings and natural beauty of Saint John.