Arieh Warshel, a worlwide-renowned biochemist, has been the first to win the University of Debrecen Science Impact Award (uDEsia) of UD. The Nobel Prize laureate researcher received the award from rector Zoltán Szilvássy on 29 March.

The uDEsia-Award was established by the Senate of the University of Debrecen last year to recognise the scientific achievements of a researcher who has already received a Nobel Prize or a similar award, and has been engaged in cooperation with researchers and the science community of UD in any research area the university is involved in. 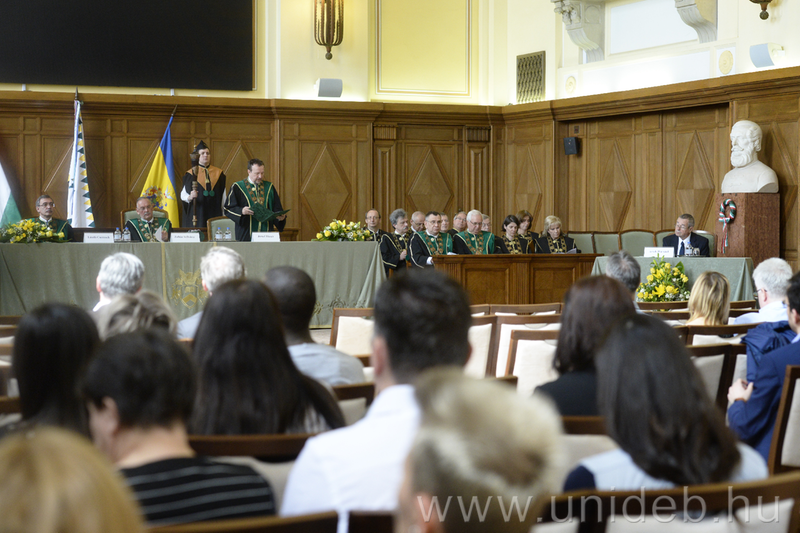 At the award giving ceremony, which took place on Friday, József Tőzsér vice rector for health industry innovation and training described the career of the winner. Ariah Warshel is member of the National Academy of Sciences (US) and the Royal Society of Chemistry (UK), and holds an honorary doctor title at Uppsala University (Sweden). The professor of chemistry and biochemistry runs research programmes at the University of Southern California. Earlier he also worked at the Weizmann Institute of Science and the Molecular Biology Lab in Cambridge. In 2013 Ariah Warshel was awarded with a Nobel Prize together with Martin Karplus and Michael Levit for the development of computer models of chemical and biochemical molecular systems. 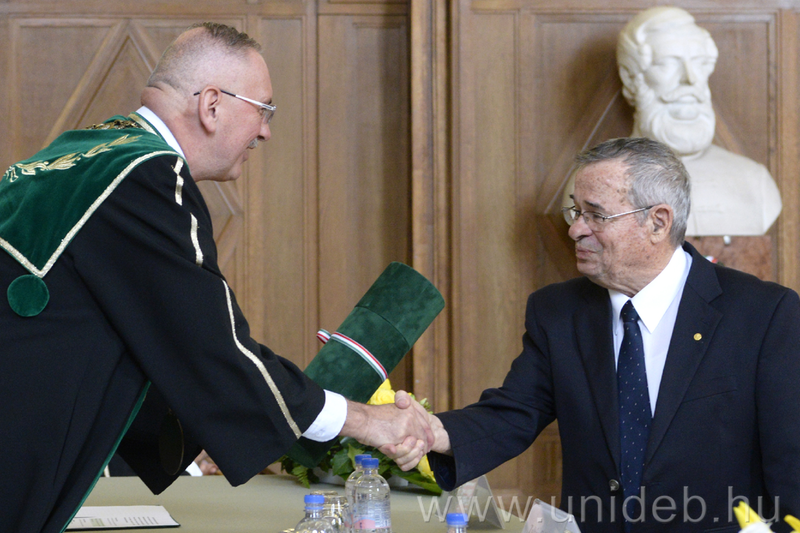 At the award giving ceremony the Israeli-American professor of biochemistry and biophysics also gave a presentation entitled Multiscale Modeling in Biology. Ariah Warshel explained to hirek.unideb.hu that his research work basically helps pharmaceutical research, contributes to a better understanding of diseases, and also supports the development of new drugs.

Mr. Warshel, one of the most prestigious researchers in the international science community, finds his collaboration with researchers at UD important. He has worked together with Mónika Fuxreiter, lecturer at the Institute of Biochemistry and Molecular Biology, for over 20 years,  on the understanding of enzymatic catalysis. They have been working on a pioneering procedure that would allow the production of artificially designed protein molecules, which are similar to the thousands of natural enzymes present in nature, but can accelerate biological processes very efficiently. 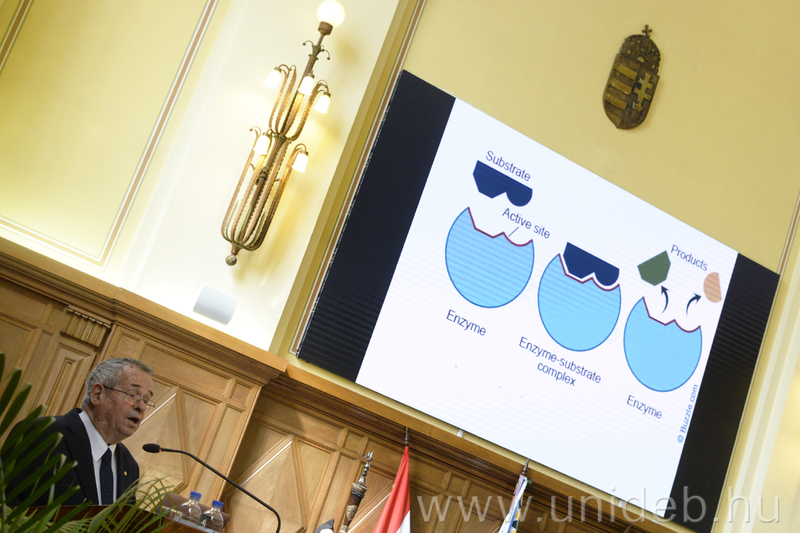 - In addition to his activities carried out at leading institutions of the world, Professor Warshel has also established a working group at UD, thus setting an example and providing guidence for the students of the university. It was not a coincidence that the programme of the professor started with a presentation to medical students in Debrecen – said Zoltán Szilvássy after the award giving ceremony on Friday.

The rector of UD expressed his hope that in the future other Nobel Prize laureate researchers who cooperate with UD will also give lectures and presentations to students, as well as inspiration and new perspectives to researchers of the university.
Following the ceremony, vice rector József Tőzsér emphasized that the winner of the award had highly contributed to the improvement of the educational and scientific performance of the university.

- The professor has contributed to our educational activities, and with the uDEsia award he has also joined the scientific advisory board of the university – said the vice rector. 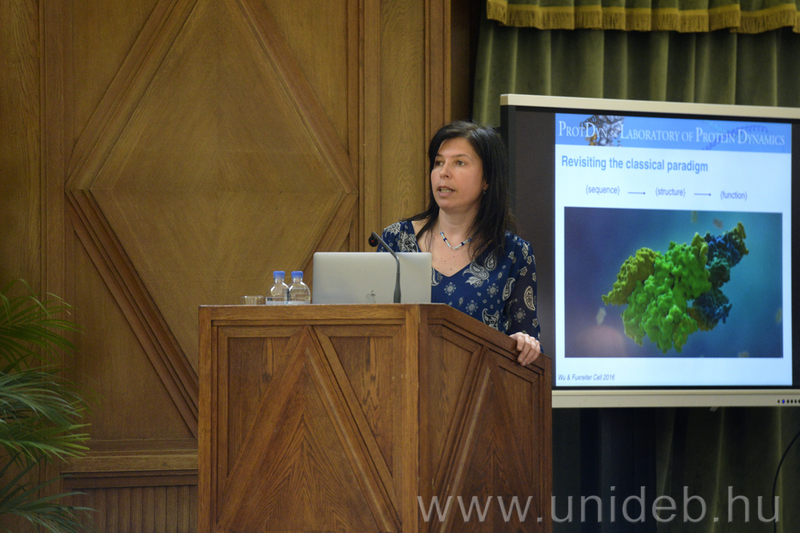 - We had started to work with professor Warshel a long time before he received the Nobel Prize, focusing on developing a concept about how enzymes function. Most medications are produced using enzymes, and our joint research programmes highly support the development of this process – explained Mónika Fuxreiter, who presented her research under the title Conformational Heterogeneity in Enzymatic Catalysis.

To Learn From a Nobel Prize Laurete

Biochemist and Noble Prize laurete Arieh Warsel gave a lecture at the Life Sciences Centre of UD on 28 March. The auditorium was packed with students eager to learn. The renowned scientist transferred his knowledge to medical students in the framework of the biology programme, under the title Understanding of Enzyme Catalysis. The guest lecturer was welcomed by vice rector József Tőzsér. 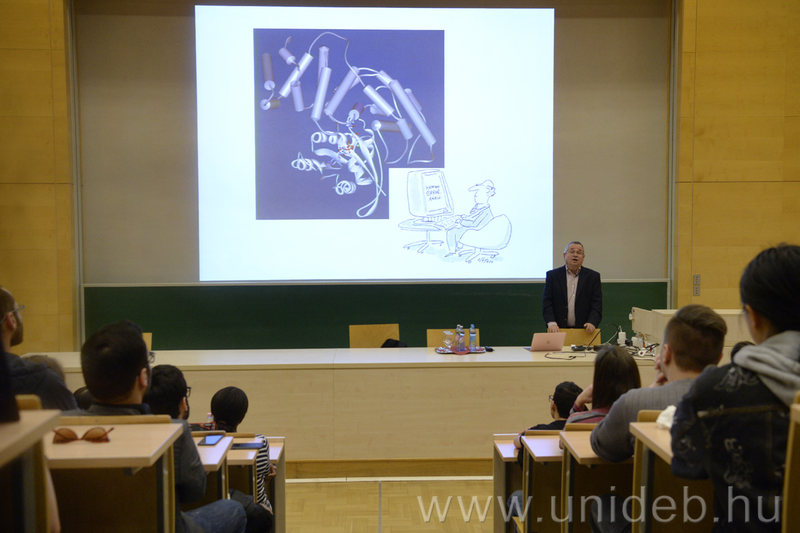