Calculations for a Safer Internet

A presentation on the mathematical background of the RSA encryption applied on the World Wide Web was held this past Friday at the Faculty of Informatics by a professor Andrej Dujella, who then also received his honorary doctor’s degree from the University of Debrecen on Saturday.

Andrej Dujella had earned his BSc and MSc in mathematics at the University of Zagreb, and received his PhD degree from the same university in 1996. Following his graduation from UZ, he started at the bottom of the university hierarchy to be finally appointed a full professor in 2004. In 2012, he was admitted to the Croatian Academy of Sciences and Arts as a regular member, where he has participated in the work of the Presidency of the Academy since 2015. The chief areas of research for Professor Dujella include number theory, with special emphasis on diophantine equations and their application in cryptography. He has written 100 scientific publications, mostly in prestigious international periodicals. One of the natural applications of diophantine equations is the construction of elliptic curves of given torsion groups. Professor Dujella currently holds world records in several related categories. He has also achieved significant results in the field of cryptography, too. He has worked out an algorithm for breaking the RSA (Rivest-Shamir-Adleman) cryptosystem, one of the most widely used practical public-key algorithms, by choosing certain parameters. Professor Dujella met Attila Pethő, the Founding Dean of the Faculty of Informatics, at a conference in Graz, which was held in 1996, following which he was invited to give a talk at the University of Debrecen the same year. During the course of the past twenty years, the two of them have co-authored three academic papers, the first one of which has been cited more than a hundred times. They have acted as lead experts in two joint Hungarian-Croatian projects, and hosted a workshop called Hungarian-Croatian Workshop on Mathematics and Informatics in Debrecen in the year 2005. Several other participants from Debrecen and Zagreb have joined their research projects since. So far, Andrej Dujella has co-authored articles and papers together with as many as eight Hungarian researchers, including the outstanding representatives of the number theory school at the University of Debrecen Attila Bérczes, Lajos Hajdu, Kálmán Győry, ÁkosPintér, Szabolcs Tengely and Márton Szikszai. He is a regular participant at conferences on number theory held in Hungary. 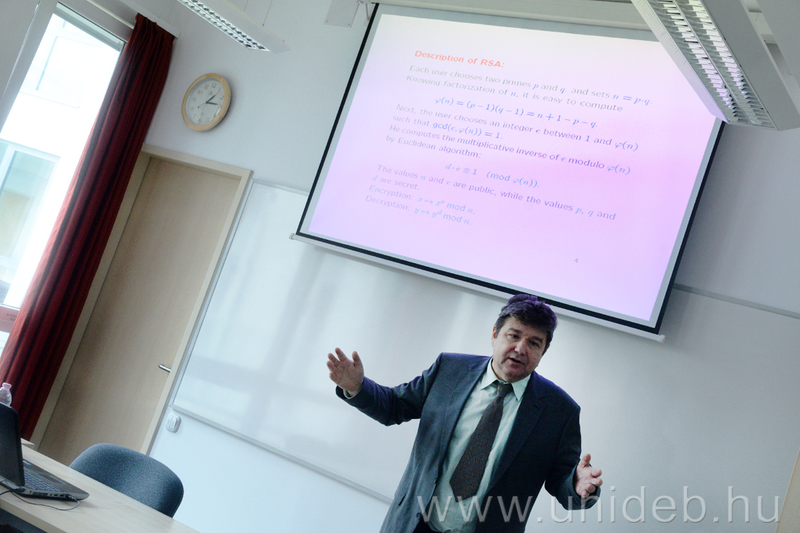 In his talk “Applications of Diophantine approximations algorithms in cryptanalysis of RSA,” he presented how an encryption algorithm used widely on the Internet could be made safer. The efficiency of RSA is based on the fact that the multiplication of two large random prime numbers is rather difficult to break down into factors. However, among certain circumstances, and in the presence of certain conditions, it is still possible. The professor from UZ identified and analyzed these conditions in his presentation, and he also discussed how the parameters of an encryption key need to be specified in the case of limited capacity instruments so as to make sure that the encrypted message should not be breakable.