As a result of four years’ work, the fitness centre of the University of Debrecen, realised at a cost of 866 million forints was opened on Wednesday. On a total area of 2,600 square metres, Unifit Fitness & Gym Centre features 200 training stations, with the widest range of sport equipment.

“The University of Debrecen is Hungary’s most international higher education institution, with a total student body of thirty thousand, including four thousand international students. In order to preserve our competitiveness, however, we need to develop continuously and ensure good infrastructural conditions. In the autumn of 2013, it was decided that, similarly to the example seen at various partner universities, UD also wished to offer high-standard fitness services at a facility that would, at the same time, also be suitable for the collecting of scientific research data. We hope that this facility will contribute to achieving both objectives,” said Zoltán Bács at the ceremonious opening of Unifit Fitness & Gym Center. 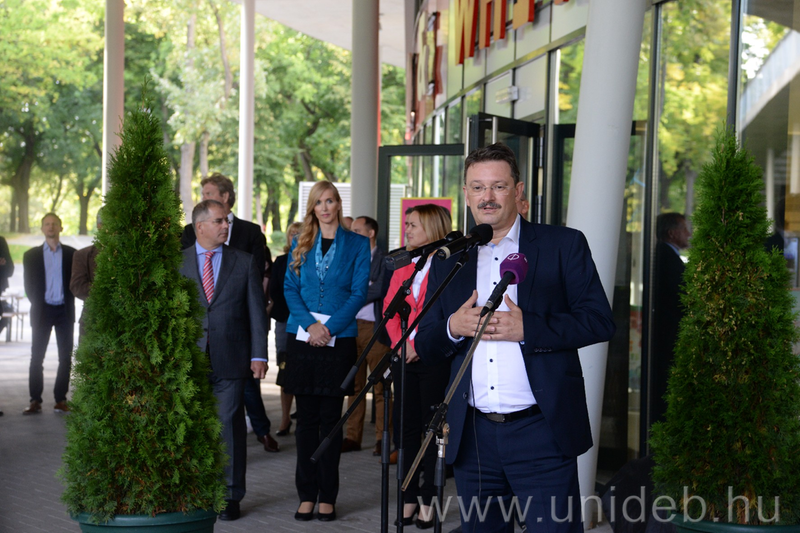 The chancellor also recalled several other important milestones in the development of the university’s sports-related infrastructure over the past 5 years: the Sports Sciences Educational Centre was completed, the artificial turf fields were renovated in Dóczy Street, a beach football pitch will soon be built jointly with the Hungarian Football Federation, and a handball arena will be also erected in cooperation with the Hungarian Handball Federation. Altogether, the university invested more than 5 billion Hungarian forints in the development of sports-related infrastructure.

Zoltán Bács also added that the excellent work of the contractors was immensely helpful, since they completed the internal works in the fitness centre in just four months.

“This is a sports facility which will serve the health and the love of sports of all citizens of the university and visitors as well. In addition, it will also be a healthcare facility, as there are many illnesses in connection with which it has been proved that they can be best treated not with medicines, scalpels or psychiatrists, but with physical exercise. These include metabolic and cardiovascular diseases, various forms of dysphoria, locomotor and sexual disorders,” Zoltán Szilvássy, rector of the university, said. 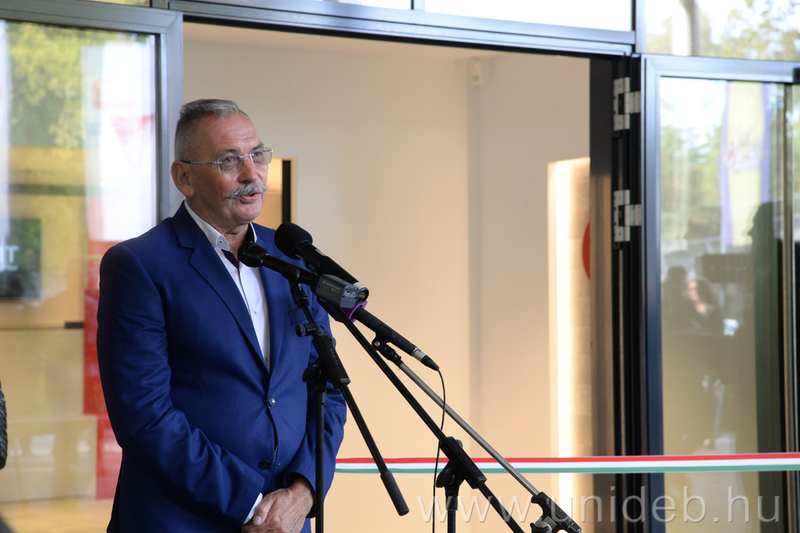 Through the complex health science services it offers, the new sports facility fits well into the tripartite system consisting of the university clinics, the sports and health science centre and the fitness facility, the rector added.

Lajos Kósa, the newly appointed minister in charge of the development of cities of county rank, emphasised in his speech that Unifit is not an average fitness centre, but a facility offering – in cooperation with the Sports Diagnostics, Lifestyle, and Therapy Centre next door and with the Sports Science Coordination Institute of the University – a complex range of services, from diagnostics to rehabilitation, to athletes, citizens of the university and the local citizens of Debrecen alike. 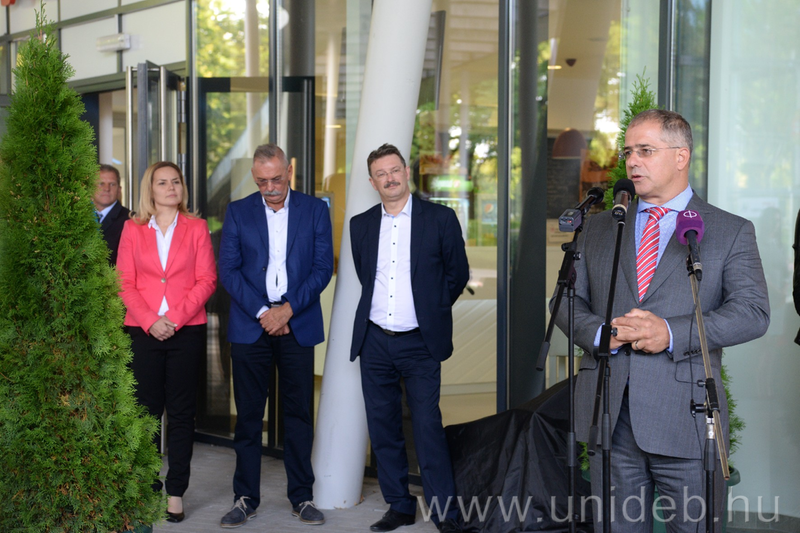 “This facility is an excellent example for a city and a significant institute coordinating its developments. This is not new in Debrecen, since the leadership of the city and the university have long been thinking together and they regularly consult on their development ideas, resulting in a win-win situation in which both the university and the local citizens enjoy the benefits”, Lajos Kósa underlined.

In her speech, Tünde Szabó, state secretary in charge of sports, said that the University of Debrecen is one of the “sportiest” institutes of higher education in Hungary, where in addition to intellectual pursuits, much emphasis is also placed on physical development. 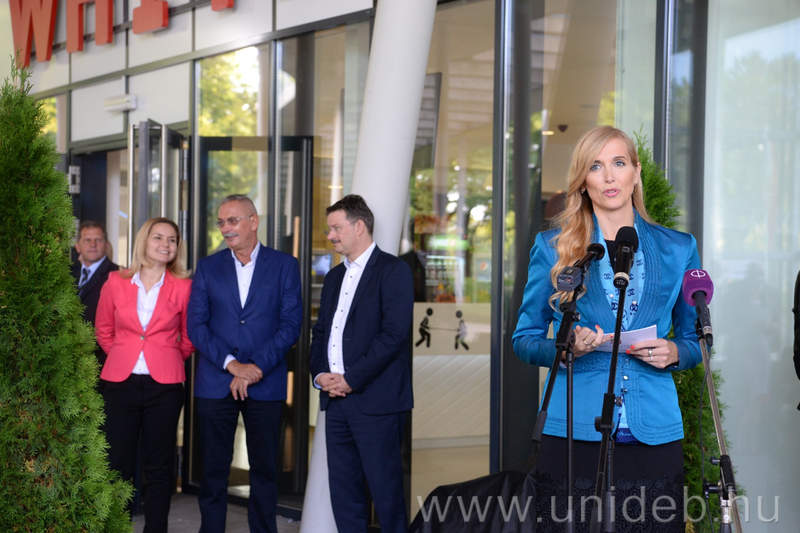 “We opened a facility that is one of its kind in Hungary in that it is suitable for conducting scientific research projects and also providing high-quality services to the students and employees of the university,” Tünde Szabó emphasised. The state secretary added: Debrecen is the city of sports where Olympic, world and European champions came from the university and other institutions of the city, and they can be good role models for those now deciding to come to the fitness centre and enjoy the pleasures of physical activity.

Diána Széles, deputy mayor of Debrecen, pointed out that thanks to the community spaces and service providing units– HALL, Red&White, SET Centre – Nagyerdei Stadium has evolved into a facility that is used on all 365 days of the year. 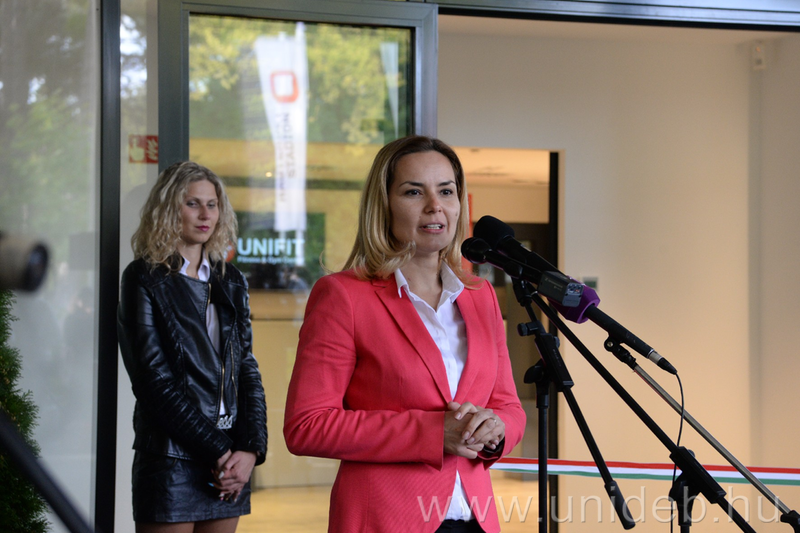 “The university has opened Unifit, and so now it is the city’s turn to take the next step. The old outdoor water park is already being demolished, and with the opening of the new facility in its place, scheduled for 2018, there will be one less black spots on the map of Nagyerdő. Since Debrecen has become a part of a prioritised tourism region, in the next 3 years we will be able to invest 14 billion Hungarian forints on the development of Nagyerdő”, Diána Széles announced.

After the ribbon-cutting ceremony, Tamás Balogh, the professional and operative director of Unifit and László Balogh, the director of the Sports Sciences Coordination Institute showed the guests around the new fitness centre. 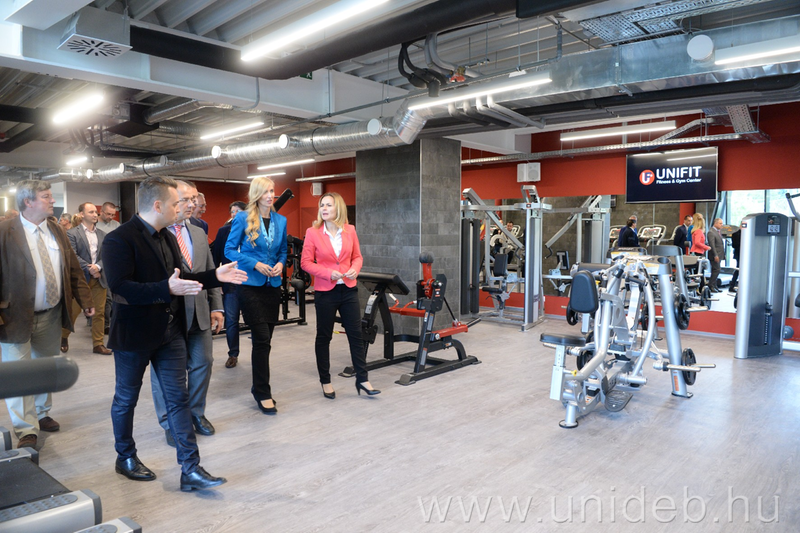 Unifit will be open to visitors from 7 a.m. on 2 October, Monday, and after a six-week test period (called “sixtestwek”), all of its services will be available. For more information, please visit the Website of Unifit.